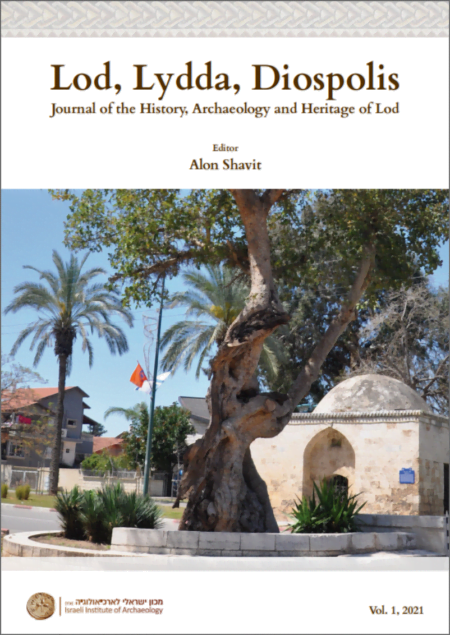 A Paleodemographic Study of the Population of Jindās, a Mamluk- and Early Ottoman-Period Village in Palestine

The Affair of the Hassuna Oil Factory Initiative in Lod

The Mamluk and Ottoman Cemetery in the village of Jindās

The journal Lod “Diospolis – City of God” has undergone a significant revolution this year. We made the fundamental decision to establish this publication as a peer-reviewed journal, recognized by the Council for Higher Education. But despite the welcome change, we are careful to instruct the authors to submit articles that are worded in clear language, without sacrificing accuracy and scientific detail.

As part of the change, we established a diverse academic editorial board, whose members are: Architect Giora Soler, Dr. Avi Sasson, Dr. Ido Koch, Dr. Assaf Zeltzer and Dr. Yotam Tepper. The editorial team will continue to be headed by Dr. Alon Shavit, who initiated the archaeological-community project in Lod and edited the journal from its founding.

Modern archeology long since came to the understanding that in order to study a central ancient site, researchers need to understand its surroundings and become familiar with the settlement system on which it relied in the various periods. This approach makes it possible to recognize the economic-agricultural-demographic potential of the central site, to identify processes of development or retreat in the region and to examine their impact on the central city. Following this approach, in the seventh volume of the journal we have chosen to lookat Lod from its immediate surroundings.The first three articles are devoted to the history of Jindās, the village closest to Lod.

Roy Marom conducted a comprehensive study of the village’s history and the pheavals that characterized the entire region in the Mamluk and Ottoman periods. Ron Toueg et al. present the archeological excavations in the western part of the village, in the fields of Moshav Ginaton, where they uncovered mainly the cemetery of Jindās from the Mamluk period and the beginning of the Ottoman period. Vered Eshed et al. present a study of the ancient demography of the village, based on a study of those buried in the cemetery. Avi Sasson presents us with one of the most impressive monuments in the city of Lod—Bir el-Zeibak, the “Well of Peace”. The place served as a road station on the main route across the country. Ruthy Lewis and Ido Koch present the finds from Tel Hadid (a relatively small settlement, located about an hour’s walk east of the city of Lod) from the Byzantine period, a period when Lod flourished.

As part of the changes that the journal made this year, we decided to establish a section called “On the Margins of Research” which will feature various reviews that have not undergone peer-review. Oded Shai reviews the depictions of Lod in art, starting with the Byzantine- period Madaba mosaic and followed by a series of works of art created between the 15th and 19th centuries. The current volume closes with Alon Shavit’s review of the series of attempts made by the Israeli Institute of Archeology and the Council for the Preservation of Heritage Sites to obtain a concession to develop the Hassuna Oil Factory as a visitors’ center.

Unfortunately, these attempts have so far been unsuccessful. We hope you benefit from reading this volume,
The Editorial Team.